I love weddings. There is nothing better than a loving couple throwing a bash for family and friends.

We spent a long weekend in Epsom (outskirts of London) at Angela’s and Adrian’s wedding.

Angela is an old friend of Suzanne’s. They worked together in Japan.

We had a great time at the wedding. The ceremony was beautiful, and as relaxed as Catholic ceremonies come.

I even suggested to Father Peter that we could sing ”Hard Rock Hallelujah” instead of ”Alleluja”. But, alas no such luck.

The party was a lot of fun. No unnecessary formalities. The speeches were just perfect: funny, witty, romantic and touching. At one stage we were all laughing, at another we could not hold the tears back.

Emilie and Oliver enjoyed the wedding as well. They were running around and dancing with new found friends Alice and Ben.

I guess I was so excited about the wedding that I went a bit over the top with my camera work. Some 160 pictures will be on their way to Mr. and Mrs. Clark-Morgan by the end of the week…Below a couple of them. 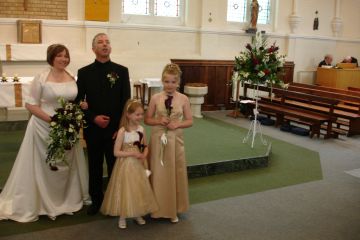 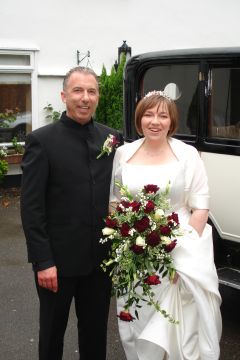 Adrian and Angela getting ready to party.