The Slovenian Presidency kicked off its stint at the helm of the Council of Ministers a couple of weeks ago. Today it was time to present the Presidency programme in the European Parliament.

Prime Minister Janez Jan?a gave a business-like speech about the priorities of the Slovenes. It will be interesting to contrast his speech with that of Nicolas Sarkozy when the French take over the Presidency in six months. There is often a fine line between rhetoric and reality… 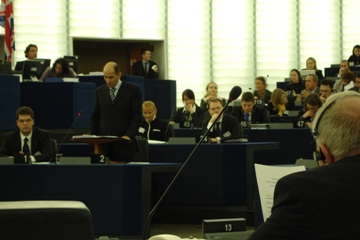 Jansa’s speech was refreshing in that it did not just stick to the usual EU-jargon that we hear so often in the EU institutions. He went back to history and reminded us what EU membership means for a country like Slovenia, which only 20 years ago was a part of Yugoslavia.

The tone of his speech reflected what we can expect from the Slovenian Presidency. It will be a no-nonsense Presidency which will most probably achieve a lot.

It will be succesfull for three reasons. They have prepared well, they have little political luggage and they are result oriented. 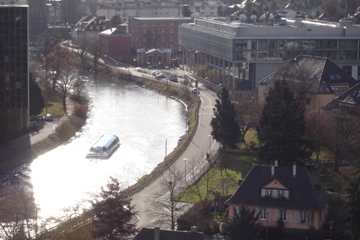 A view from the 9th floor of the European Parliament building in Strasbourg.

In my intervention in the plenary today I could not resist making a link to ski-jumping, a sport the Slovenes know a thing or two about.

I said that their task is as challenging as the hill of Planica. Their instruments are as good as the skis of Elan. And their courage is as impressive as that of Primos Peterka, the most famous ski-jumper of Slovenia. At least the Prime Minister and the EU ambassador of Slovenia seemed to like my comparison.

In any case I wish the Slovenes the best of luck. They are the first Presidency of the member states that joined the Union in 2004. In addition they are full members of the euro and Schengen. Not bad for a newcomer!

I recommed that you check out the Slovenian Presidency programme. It is straight forward and well written. And it gives you a good picture of what is going on in the EU at the moment. If you feel a little lazy you might just want to skim the headlines.

I think that they have three big challenges: the ratification of the reform treaty, the energy package and Kosovo.

What do you think? What are the key issues for the Slovenian Presidency?

Do not hesitate to answer in one of the five blog languages: finnish, swedish, english, german or french.

PS. Thanks to Maria for telling Javier to check out my blog. Don’t you think that he should write one too?