Early morning. Sitting on the plane from to . Looking forward to plenary week.

Can’t say I have been thinking much about the plenary in the past few days, though. We’ve been campaigning in the Finnish Presidential elections, and it paid off.

Sauli Niinistö, our centre right candidate, flew into the second round with 24.1 percent of the popular vote! Tarja Halonen (Social Democrat), the President in office, got 46.3 percent. Prime Minister Matti Vanhanen (Centre Party) gathered a total of 18.6 percent. 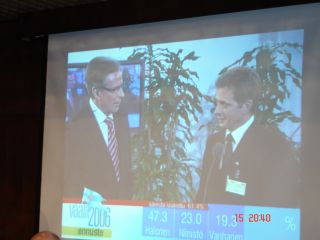 To those not familiar with Finnish politics it might seem a little odd that I am over the moon about the result. There are three reasons for being ecstatic:

Firstly, we made it to the second round. All of the opinion polls predicted that Halonen would snatch it in the first round. Well, she did not, and she missed her mark by a mile.

Secondly, Sauli Niinistö defied expectations (and polls) by getting a quarter of the votes. His trend is up. Halonen’s trend is down (she got 44 percent on the actual election day, but overseas and pre-voting boosted her overall percentage). The field is wide open. As crazy as it sounds, we stand a chance. Especially since Vanhanen yesterday announced that he will back Niinistö.

Finally, I am happy for Sauli and the whole team. We worked relentlessly and it paid off. Right now second place feels like a victory. In two weeks I believe we can take it one step further and go for glory. 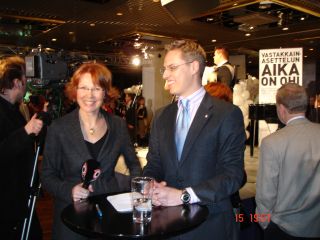 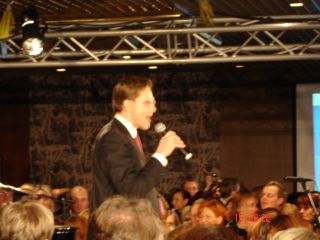 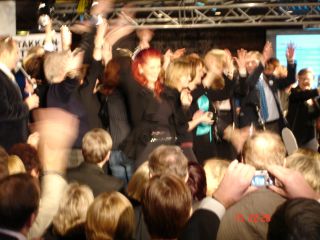 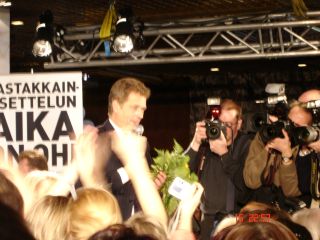 The hero with cheering fans 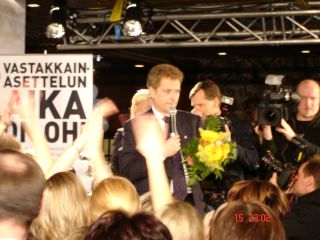