The so called European External Action Service, i.e. a diplomatic service, is one of the most important innovations of the new EU treaty.

We talked about it today in the Constitutional Committee. Our raporteur is ”the one and only” Elmar Brok. (By the way, I am an Elmar fan!)

The new service is supposed to be up and running when the treaty enters into force, hopefully sometime next year. The preparations are on the way and I predict that we will be looking at the hottest institutional issue of the coming years.

Why do I think it will be hot? Because it involves three power struggles: 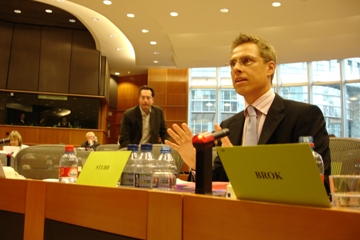 In my mind the diplomatic service is important, not least because it will strengthen Europe’s role in foreign policy. We are a superpower in trade and development policy, but relatively weak in foreign and security policy.

Will it mean an end to the foreign policies of member states? Of course not, albeit that many eurosceptics will try to argue that it does. I guess it is a bit like saying that Her Majesty’s Foreign Office will be made redundant. Yeah, right. The UK will continue to have one of the best, if not the best, diplomatic service in the world.

In today’s Committe debate I stressed the importance of avoiding an institutional fight between the European Commission and the Council of ministers. We have seen too many of these petty fights over the years.

I would like to believe that we will avoid a fight this time around… but sometimes my optimism takes the better of me.

I think that there are eight key questions relating to the set up of the new diplomatic service.

2. Division of staff between the member states, i.e. should the big states send more diplomats than the small states? To be honest I don’t really know. I guess a lot of it has to do with available resources. I would assume that it is in the interest of all member states to have as many ”detached national experts” as possible.

3. Physical location, i.e. where will they be located in Brussels and abroad. I think they should be in a Commission building in Brussels (they have the administrative resources. When abroad, it would be wise to convert the 120 so called Commission representations into EU embassies. The infrastructure is there, why not use it.

4. Reporting obligations, i.e. who are they accountable to? The new Foreign Minister or the new EU President. Logically it should be the Foreign Minister who is conveniently ”double hatted”, i.e. responsible to the Commission and the Council.

5. Legal status, i.e. should it be a new agency or a part of the current institutional structure? Definitely the latter. No need to create a new buraucracy when an old one can be used. As above, it should be an integral part of Commission.

6. Diplomatic immunity, i.e. should they have the same status as ”normal” diplomats? Why not! In any case I never felt that there was any advantage in having a diplomatic passport.

7. Funding, i.e. who will pay for the bill? In my mind the money should come from the Commission budget. I guess member states should pay for their own ”national experts”, but the bulk of the budget should be managed by the Commission.

8. What tasks should it have? This is a fundamental issue which will probably influence many of the questions above. Areas such as trade and development are already managed fully or partially by the Commission. I would assume that the solution is to keep it in the Commission services, but under the authority of the new Foreign Minister.

So, here are some of the key issues at stake. It would be great to hear what you think about some of the issues raised. Go for it!