Decision on the monitors

Great news! Our OSCE team in Vienna were able to broker a compromise. We will send in 20 military monitors to Georgia right away. An additional 80 will be sent as soon as possible.

Thank you Aleksi Härkönen, Vesa Vasara and Mikko Kivikoski for a great job! Their Russian and Georgian counterparts were very constructive.

I started the day in the Nato Foreign Ministers meeting where I gave a briefing on what the OSCE is doing in the region. After the briefing I gave a press conference and met with Condoleezza Rice and Dan Fried. 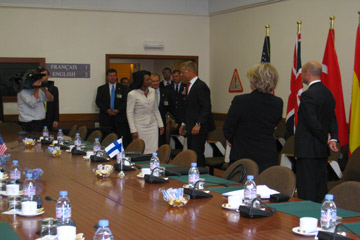 Before a coordination meeting between the OSCE and the EU I met with my Greek counterpart and a Spanish delegation. Why? Because that is the so called OSCE Troika (previous, present and future OSCE Presidency). 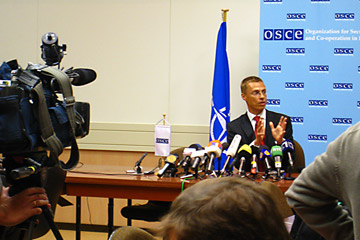 Now we are reaching the operative stage in preserving the ceasefire. Things are moving. I think this is a good sign. I hope that I am not overly optimistic.