Today I was left a bit baffled. I was looking forward to hearing Austria’s Foreign Minister, Ursula Plassnik, at the Constitutional Committee. She was supposed to tell us what Austria is going to do with the Constitution over the next six months.

Plassnik gave a nice overview, but that’s about it. I guess she is a bit between a rock and a hard place. Everyone seems to have questions, but no one is able to provide concrete answers.

In my own intervention I outlined three key dates:

1. The end of the Austrian Presidency in June 2006. By then we need a roadmap of what is going to happen to the Constitution.

2. Middle of 2007. By the end of the German Presidency (first half of 2007) France and The Netherlands will have had their elections. After the elections we should have a clearer picture on how to proceed. 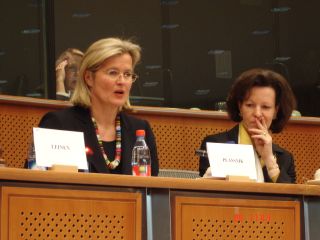 I tried to quiz the Foreign Minister on the intentions of the Presidency. I wanted to know where and when the Constitution will be dealt with and what she thought about the interparliamentary forum between national and European parliamentarians in May.

I did not get many answers. Oh well, I can’t blame Plassnik. It is not her fault that we are in this mess.

It was nice to see many ”old” colleagues who are now in key positions in the Austrian administration. Alexander Schallenberg is the spokesman of Plassnik and Elisbeth Tichy is the director of European Affairs in the Foreign Ministry.

It was also nice to see Jean-Claude Piris, the legendary director general of the Council’s legal service. One of the most competent EU-lawyers I have had the pleasure to work with. Not only that, he is a great guy too – a ”jolly good chap” as brits would say. 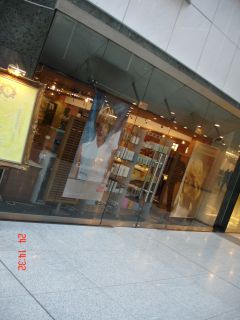 The European Parliement is like a mini-town. Here is the hairdressers…

I note that Dutch Foreign Minister Ben Bot visited Finland today. He met Finnish Foreign Minister Erkki Tuomioja. Bot repeated his position that the Constitution will not enter into force in its current format.

As Dutch EU-ambassador Bot was known (and appreciated) for his frankness. I am glad to see that his style has not changed. 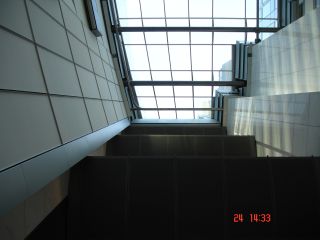 I always wanted to be a photographer…This is the transparent roof of the parliament.