A day in Moldova

A couple of hours? flight right in the morning took me to my first visit to Moldova. On the plane, I spent time carefully studying my papers and preparing for the meetings together with a delegation of senior officials from the Ministry, Nina Vaskunlahti, Mikko Hautala and Harri Kämäräinen.

In the capital of Moldova, Chisinau, I first met with my colleague Iurie Leancan. Iurie is a competent and motivated Minister, who is full of enthusiasm.

Our discussions focused on the relations between Moldova and the EU, the frozen Transdnistrian conflict and Moldova?s foreign policy. 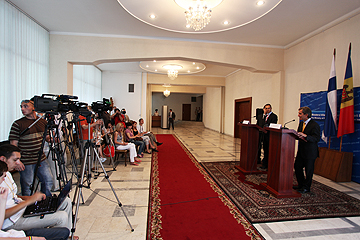 Moldova?s coalition Government, which came into power last year, has committed to seeking convergence with the EU. Results have already been reached within a few months. Moldova is negotiating an association agreement. The policy of exemption from the visa requirement is also being phased in. The ultimate goal is a free trade agreement.

Moldova thus wants to integrate into Europe, because it is where it feels at home. Iurie told me bluntly that they want to become a normal and boring country. I was pleased to note that Moldova is not only asking for help but also demonstrating commitment to hard work and reforms.

We talked about the current situation of Transdnistrian at length. The frozen conflict is discussed in the so-called 5+2 format, comprising Moldova, Trans-Dniester, the OSCE, Russia, Ukraine, the EU and the USA.

This format continues to play a key role and it deserves a strong support. Meetings at official level have been at an impasse for several years already. Germany and Russia have recently proposed that the discussions could also be pursued in a special Russia-EU committee. This could be a good way to promote and support the process as a whole.

We also touched upon many other aspects of Moldova?s foreign policy. The discussions were very fruitful and I learned a lot.

The relations between Finland and Moldova are excellent but thin. The volume of trade is at a modest level of EUR 10 million. However, we are now working on strengthening the relations; Finland has launched concrete projects in the country and a special trade seminar will be arranged in the autumn to support fledgling business ideas. 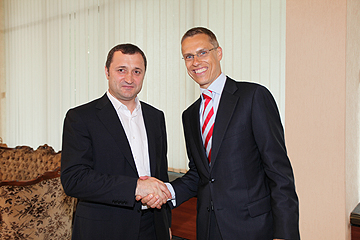 Meeting with the Prime Minister.

The flood alert in the south of Moldova brought some drama to the day. The meeting with the President was cancelled because he had to dash to the disaster area. I also met the Prime Minister only in passing.

My visit ended with a walk with Iurie around the city of Chisinau. That was a welcome breather.