If yesterday was tough, today was big…well at least it felt big for me.

In the morning we voted in the Constitutional Committee on the composition of the European Parliament. This so called Lamassoure-Severin report sets out the allocation of EP seats for the 2009-2014 mandate.

We worked on some of the compromises late into last night. Emotions run high when MEPs negotiate about relative power. Yesterday was no exception.

I think my colleagues Alain Lamassoure and Adrian Severin did a great job. It was no easy feat to get a clear majority of MEPs behind the proposal, but they did it.

Everyone has a tendency to get into serious navalgazing when talking about the distribution of seats in the Parliament. I am no exception.

Finland got to keep its 13 seats which were agreed already in Nice in 2000. In that sense there was no loss. Some might try to sell it as a loss because we have 14 seats at the moment. I suppose we all have our own way of looking at things. I try to look at the bright side.

After the votes we worked on my report on lobbying. We had a good brainstorming session with my assistant Henrik Ruso and two fantastic civil servants who work for the Constitutional Committee. I am really getting into the whole lobbying thing. It is a fascinating subject.

I had lunch with Foreign Minister Ilkka Kanerva and most of my Finnish MEP colleagues. Its good to get together and exchange ideas. This time we spent a lot of time on agricultural questions.

Ater lunch I met Commissioner Gunther Verheugen. We discussed the so called Goods Package, which deals with the free movement of goods. To be more specific: it deals with mutual recognition of goods, market surveillance and the CE-marking.

I like Verheugen. We had a good chat about the state of play of the package. I briefed him on what is going on in the Parliament and he briefed me on how he saw things in the Commission.

The Goods Package got a lot more ”sexier” after the toy-scare caused by Mattel. Our package does not really have anything to do with the safety of toys, but one thing has a tendency to lead to another.

I devoted the rest of the afternoon to the Internal Market Committee. And have a guess what was on the agenda? Well, the Goods Package.

I am working on the package together with two colleagues, Christell Schaldemose and André Brie. Both of them are great and we have had a blast trying to work through the two regulations and one directive which make up the package.

The debate in the Committee was very useful indeed. A majority of colleagues have been working hard on the dossier. You could really sense that in the debate today.

We talked a lot about national safety marks and the directive on general product safety. Both issues are indirectly linked to the Goods Package.

Things are moving forward. The deadline for amendments is 11 October. After that we will take stock and start hammering out compromises.

In this job you can’t always get what you want. It is all about compromises. Any which way, today was a big day. 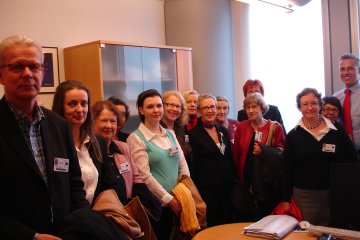 Visitors group from the Women’s League of the Coalition Party