I just finished the Brussels Marathon in 3 hours and 35 minutes. Can’t help it, but I have mixed feelings.

I am happy that I improved my by 25 minutes in 8 weeks. At the same time I am gutted that I did not do better. Things were going really well until 32 km. I was following the 3h30min ”rabbits” and we were approximately 3 minutes ahead of schedule. 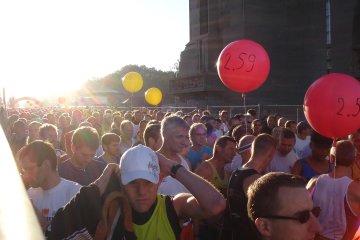 My legs felt fresh, and I really felt that I could sprint towards a 3h 20min or at least 3h 25min. And then everything went wrong. I got a really painful stitch in my lower abdomen. It was impossible to run for more than a few hundred metres at a time.

I had to walk and when I ran I had to stay in a 90 degree angle. It was actually easier to do the long hill by Parc du Woluve, towards Montgommery (35-37km). I was really sprinting, albeit in a funny position.

My assistant, Tuomas Rautanen, ran the marathon with me. It was his first 42 195 metre race and he did fantastically well: 3h 39min, and basically without major training and 5 year old running shoes! 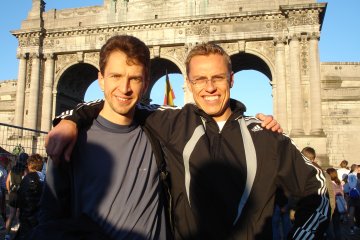 Not only that, but he gave me encouragement to push harder when he saw me doubled over at 38 km. What a super assistant!

I draw three lessons from the marathon:

1. It pays off to train. I did not train properly for the Helsinki City Marathon. This time around I followed a programme that I got from a friend of mine, Simon Mordue (a 2h 39min man). It was a 16 week programme and I did 8 weeks of it.

2. Be patient. In Helsinki I started way too fast. This time around I followed the pacemakers. The half-way stage went in 1h 43min and the second half would not have been worse was it not for the stitch (aargh!). 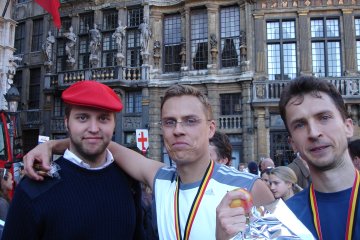 All the same, it always feels great to finish a marathon. I wonder which one I could do next…?

Henrik Ruso, also a superassistant of mine, came to the starting line to support us at 8.30. Respect! Not least because he came home from the football match at 4.00 this morning. We will put in some photos and a videoclip tomorrow morning.

Titta Anderson, also a superassistant, has also helped throughout the weekend with all the logistics.

Oh my God! I must look like some kind of a monster boss! One assistant runs a marathon with me. Another is forced out of bed on a Sunday after less than 4 hours of sleep. And the third has to pick up my friends son from the airport and wait for me to show up.

PS.The marathon served as a therapeutic session after Finland tied Belgium in the Euro 2008 qualifier yesterday. Despite yesterday’s result I am convinced that we will make to the tournament, not least with Sisu (i.e. Finnish courage). Our team is fantastic and they will go all the way!

PPS. Good luck Joe and Manuela, who are running the Amsterdam Marathon next weekend!